The Magic Garden is something I have been developing recently with great pleasure and excitement. It was named by the children. Every child who tries it is instantly entranced by its cuteness and the fact that they get to play God and create their own little world exactly how they want it. It’s basically a very adaptable small world playset, but with one very attractive difference: it’s magnetic! This means the pieces stay put and don’t fall over, letting even 2 year olds create amazing worlds with it. It also means it is addictive! The pleasure of sticking magnets down is utterly captivating to a child, and so far this set has been loved by children of all ages, from 2 to 10.

Originally an offshoot from the Magnet Box, the idea was given to me by a four year old who was arranging the magnetic pieces on a baking tray. It looked like a forest. I cut out some flowery paper for a more realistic forest floor. She wanted a place for some animals to drink, so the next day I cut out a pond from mirror card and stuck some felt flowers onto little magnets. So the garden started very simply, with just a pond and some plants.

I already had a set of magnetic ducklings in the Magnet Box, so they were the first inhabitants of the Magic Garden.

Then I got out my polymer clay…. 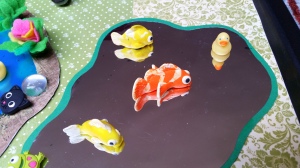 ….and made some more creatures for the garden. It was easy to incorporate tiny magnets into the base of each one before baking the clay.

I found a set of mini fish magnets at a site called First4magnets.co.uk, who also had a lot of the useful tiny magnets I needed. And everyone’s favourite glass pebbles had to have circles of magnetic sheet stuck to their bases too! 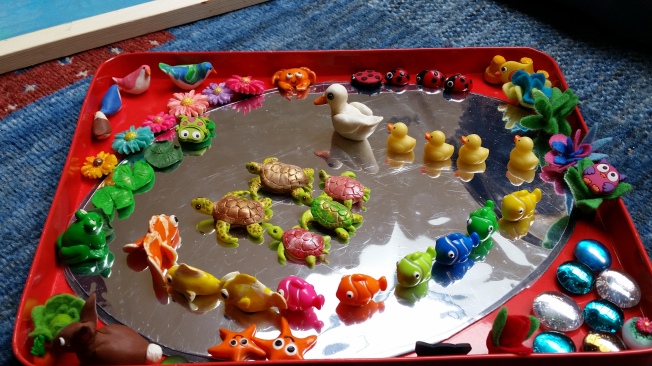 I unleashed it on the Nursery children next to see what they would make of it.

The younger the child, the more they simply couldn’t stop themselves sticking every single magnetic creature to that pond. 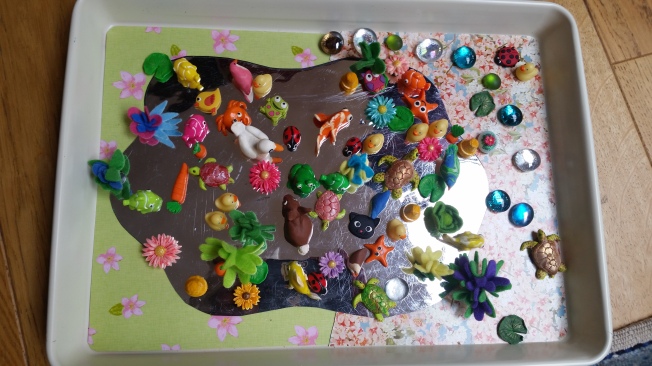 The children showed me that the ponds were a vital part of the garden, so I made a few more.

I then decided to invest in some more trays and a magnetic whiteboard, onto which I made a simple beach scene, as I had made some weeny magnetic sandcastles…I decided this was my Summer scene. 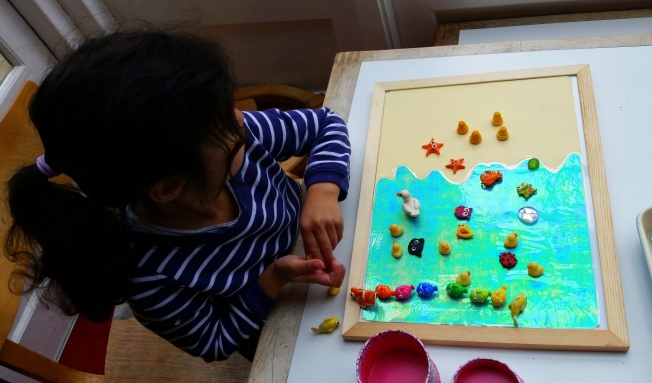 That went down well too.

Adding some shells made it even more realistic…

After that, I happened to buy some rather unusual paint to try out (Pebeo Prisme Fantasy Moon paint), and suddenly found myself creating more advanced ponds and lakes! After a bit of trial and error, I got the idea of making ‘stone’ pond surrounds by Googling ‘granite’ or ‘travertine’ and then printing out the resulting images, which I cut to shape, stuck around the pond and customised with a bit of pencil. Adding real pebbles allowed the children to made little stepping stones and paths.

Every day I got sucked further and further into the Magic Garden experience and thought of more ideas, the creative process every bit as exciting for me as playing with the gardens was for the children. They would sit for hours totally absorbed in arranging all the little pieces just the way they wanted them. Did I mention one child asked for a vegetable patch, and another thought it was a farm with a mud puddle for the pigs to roll in? (that’s when I made the pigs and carrots. And then there had to be a rabbit to eat the carrots. And of course the birds had to have nests. With eggs in.)

I found a big bag of reindeer moss and some tiny paper flowers in Hobbycraft to decorate my ponds with!  Joy!

The most recent accessories have been some teeny tiny boats, gardening tools and implements found on eBay…a watering can an inch high, a tiny bird table, a cute little barrow… The Japanese apparently take great joy in their ultra cute miniature fantasy worlds too! (So would I if my country was being poisoned by Fukishima).

This activity set is a bit time-consuming to make, but not difficult, only loads of fun. I have made them with children aged 5 to 9, who love making the little clay animals and vegetables (we use Fimo). If you’re stuck for how to start with Fimo, there are loads of online tutorials for making simple animals on YouTube. It’s very easy to cut a wiggly blue pond from shiny paper, or if you fancy some advanced artistic fun when they’re in bed, try painting a wonderful swirly pond with super easy and fun Pebeo Prisme Moon Paint, you simply drizzle it on thickly like honey and swirl it this way and that with a lolly stick! It takes a good week or so to dry fully, put safely away from all movement so it doesn’t get hairs falling in it, and I would recommend varnishing it to protect the surface from scratches. You do have to protect your clothes, as it will totally ruin them if it drips on you, and it’s solvent based so you’ll need white spirit for cleaning brushes if you use them, so this paint is not one for the kids to use!

As for the rest, it’s just a baking tray and coloured paper. I like scrapbooking paper, as it comes in some nice patterns; a good art shop will have interesting paper and the right colours to make a meadow, flowerbeds or soil. I got most of the magnets from First4magnets, who can advise on what are the best magnets to use.

This activity is huge fun for kids to make themselves with a bit of guidance, and just as much fun to play with endlessly once it’s made, and there’s the added interest of it never quite being finished – you never know when you’ll find that extra little thing to add. The garden design can also be taken in many different directions, from formal town garden to wild meadow, playground or allotment!

Watch this space, as I plan to make a garden for every season as the year turns. I am already collecting white sparkly snow paper and arctic penguins and seals……building a magnetic igloo will be the biggest challenge!