My latest play project is a little garden made from kitchen ingredients in a tray, which is endlessly and infinitely swirlable and enticingly sensory for small children. While putting it together I started sifting the lentils and seeds through my fingers and found myself entering a kind of meditation zone. Even more excited to try it out on the kids, I collected as many different little seeds and pebbles as I could find. I had kind of Japanese Zen garden images floating though my head…..which is why I’m looking for a weeny rake right now!

I can’t take credit for this idea; this is just my personal take on a very popular sensory activity.

have been reading quite a few of the parenting blogs out there, and I have to say my absolute favourite is The Imagination Tree. I cannot compete with the indefatigable home-schooling Anna, who despite having 3 young children, finds time to write beautifully photographed new blog posts every day! She is a source of huge inspiration to me.

Recently I have been intrigued by looking through her sensory tray ideas. She has some very inspirational sensory writing trays and has also collected a huge assortment of posts from other blogs about everyone else’s take on sensory tray play, which I received on Facebook after Liking her page. I hope you will be as excited about trying them out as I am!

A sensory garden or tray can be as simple as a tray of salt, sand or seeds for children to play with (and they will adore it). You can also add props such as scoops, pots, jugs etc.

My first sensory garden was extremely simple: just coloured sand in a tray. But the children loved it! I was struck by how simply swirling the sand between their fingers put the children into a kind of meditative state. Even two children who are usually like little fireflies, darting here, there and everywhere settled down with the tray for over half an hour, tranquil and blissfully content!

I added some wooden letters after guiding the children to try writing the letters of their name…and a child who had never shown the slightest interest in picking up a pencil surprised me by writing a line of beautiful letters in the sand and finding the same wooden letters. Then the kids gradually sprinkled almost all the sand onto the ground.

This gave me the impetus to try a higher-sided tray and take the activity a step further, making it even more engaging and absorbing, so the following week I made this little tray garden, using different grains and seeds. I particularly liked the flax, sesame and poppy seeds. Just discovered teff seeds, which are a sensory delight as they are a bit like sand, but lighter. For contrast I put in two types of lentil as well. I added tiny pots, stones, wood pebbles, scoops and flowers:

The children loved it, and a crowd quickly formed. 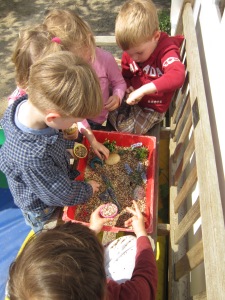 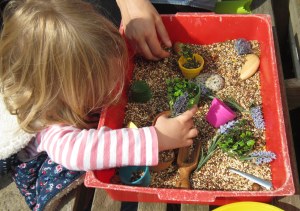 Then I experimented with a second garden. After looking at Anna’s ideas for ‘sensory salt’ I tried making blue water salt by mixing blue food colouring and glitter into ordinary salt. OOOOH! it looked magical! And the touch of dampness after mixing in the liquid colouring gave the salt a slight mouldability, like sand! I put it in a little bowl in the centre of the garden and hid some fish in it. A few ducks swam on top. But before I could photograph it in its pristine purity, my careful arrangement was very quickly descended on and mixed into a homogeneous recipe by the children, as might be expected! 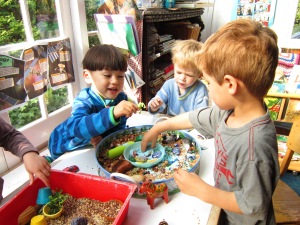 After that, I was instructed not to let the children play with it indoors anymore and to take it outside. What was left was the resulting random mixture of seeds scooped up off the floor from the first two gardens. They had the best fun of all with this one, and EVERYONE wanted a go! So after that I just sat back and let them gradually empty it all out onto the ground. The best idea of all was to put a mat underneath so at least some of it could be salvaged for another day.

This was a real winner of an idea, and one that we will definitely do again!

….Oh, and just in case you think this will be a great thing to put in a Tuff tray on the kitchen floor in winter for your young toddler…. please think again, my friend! Yes, your small child will adore them. He will love them so much he will throw them everywhere. Unless you want lentils and seeds all over the house, including under sofas and chairs, and inside the nappy, socks and bed of your toddler, keep Tuff tray seeds for outside only!